Written on March 5, 2022 in Entertainment by John


The Russia-Ukraine conflict has been making headlines all over the world and all the news channels are making their best efforts to cover and discuss the situation created due to this war. The Indian news channels are also leaving no stone unturned in covering the situation and they are also conducting debates on various issues related to it by calling guests on the shows.

As this is international news, many channels are inviting foreign guests as well for expressing their views on the situation and recently something very funny has happened on an Indian English news channel which has resulted in a meme fest on the micro-blogging site Twitter. This is not the first time that a goof-up has taken place on an Indian news channel but this one can easily be called one of the most hilarious goof-ups of all times. 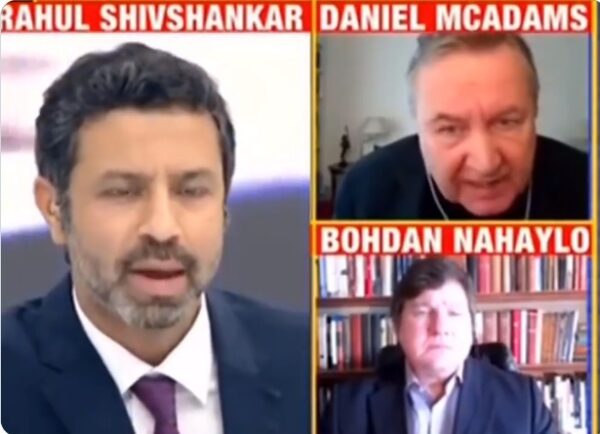 The Times Now anchor Rahul Shivshankar is not new to trolling; this time he was carrying out a debate on Ukraine-Russia war and his guest panel also had Daniel McAdams, executive director of Ron Paul Institute, and Bohdan Nahaylo, chief editor of Kyiv Post along with other guests. In the midst of the debate, Bohdan Nahaylo started speaking in a very high pitch and the mistake that Shivshankar made was that he mistook Bohdan Nahaylo for Daniel McAdams. Shivshankar kept on addressing Bohdon Nahaylo as Mr. McAdams and asked him to take a chill pill. While asking him to relax, he also scolded him and yelled at him during the debate.

After a minute or so, Daniel McAdams interrupted in between and asked Shivshankar why he was insulting him continuously and asking him to shut up despite the fact that he had not spoken a word till then. When Rahul Shivshankar said that he was talking to Mr. McAdams, Daniel made Shivshankar realize that he was making a mistake as he was Mr. McAdams. The names of the individuals were shown incorrectly in the visual which led to this big goof-up.

This is one of greatest videos of all time. Just watch till the end!

Soon after the video went viral, the micro-blogging site sparked with a hilarious meme fest. Check out some of the selected reactions here:

Some people who became famous without saying anything. #McAdams pic.twitter.com/81nR1phhuS

When your parents see you sitting in the corner, while scolding your sibling and start scolding you too#mcadams pic.twitter.com/FYSxg6VHU5

this one with music🤣 made my day! #mcadams https://t.co/3Y0z9TkANu

Every innocent husband during arguments with his wife 😂#McAdams pic.twitter.com/1pzGEygFpj

My name is Khan
And I am not a terrorist!

My name is Anthony
And I am not alone in the world!

My name is #McAdams
And I haven’t said a word!

Teacher – Mr McAdams you are distrubing the class, get out of my class 🤬🤬

I am MCAdams 😭#mcadams pic.twitter.com/VRj69EWTKz

This was indeed hilarious, wasn’t it?

Read Also:  ‘Daredevil’ Charlie Cox Teases Fans About His MCU Future, Confirms There Is Hope: "I Know Something…”