It may not be the most well known name in sat-navs, but Navigon is definitely one of the most significant players.

Almost exactly two years ago, the company bought Navteq’s software division – although the mapping portion was acquired by Nokia. So Navigon has a close relationship with one of the two main suppliers of sat-nav mapping. The 7210 takes advantage of this, including maps for 40 European countries. A code is included in the box giving you a 24-month subscription to Navigon’s FreshMaps service for just £15, which is a bargain compared to other manufacturers. 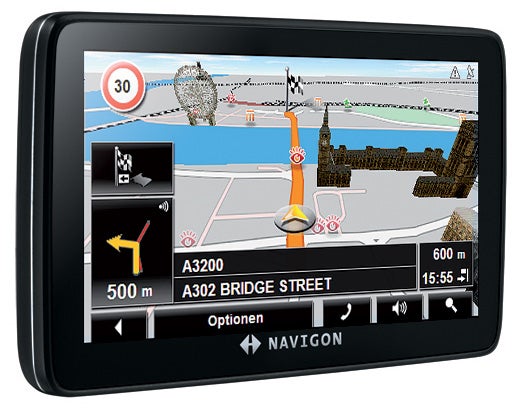 As a premium device, the 7210 checks pretty much every recent feature box available. Naturally, one of these is Landmark View 3D, which Navigon introduced with the 7200 T last year. This displays three-dimensional models of notable buildings along your route. Except there aren’t that many included outside of London, and they only appear when you are quite close. So its usefulness is somewhat questionable.

Much more practical is Lane Assistant Pro, which is aided and abetted by another buzzphrase, Reality View Pro. Together, they amount to a similar system to the lane guidance now included in the latest premium Garmin, TomTom and Navman devices. Lane Assistant Pro displays a little 2D graphic on the map screen as you approach a junction, so you know what lane to be in. Reality View Pro then provides a full-screen 3D representation of the junction, with arrows showing the appropriate lane, making things pretty clear. 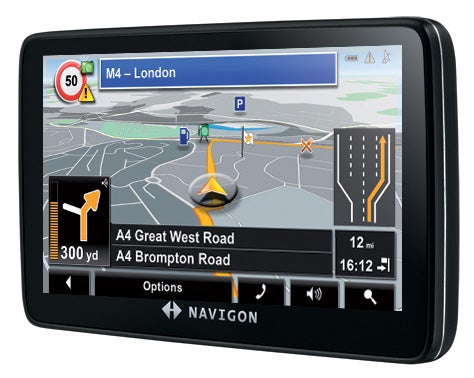 The 7210 also gives warnings of speed limits and approaching safety cameras. Rather comically, the word ‘Beware’ is intoned to let you know that you’re breaking the limit, which feels more like a polite notification from your mother than a stern alert. You can configure the 7210 to provide more tolerance depending on the area – such as +5mph in built-up areas and +10mph when buildings are not nearby. A novel addition is the Curve Warner, which lets you know of sharp bends on the route as you approach them. The Navigon does this both verbally and graphically. We found the warnings coincided with existing hazard road signs, but the added notice is handy if you’re driving in poor conditions and concentrating mostly on the surrounding traffic.

Speaking of traffic, the 7210 also has a built-in RDS-TMC receiver, with the FM aerial subtly concealed in the car charger cable. So this doesn’t work without the cable plugged in, although the same is true of most sat-navs offering traffic updates apart from TomTom’s new LIVE devices. You can call up a list of traffic alerts, and configure whether warnings are used to change your route on request or automatically.

The Navigon even has voice recognition. You get the ball rolling from the initial screen using your fingers, and then enter a destination by city, street name and number. As long as the background noise is low and continuous (so engine sounds are fine, but not radio), the recognition works fine, if you speak clearly. But it only covers address entry, so isn’t as all encompassing as the systems included in TomTom’s GO x40 LIVE range or the Garmin nuvi 860. It will be useful at most for entering an address whilst you put your seatbelt on, but stops well short of true hands-free operation.

So, overall, the 7210 has the major features you would expect for a device at this price. But, unfortunately, its most significant feature is the interface. This is a little clunky and not as polished as other mainstream sat-nav brands. If you enter a postcode, you can’t then define the house number in the street this refers to – you will just be routed to the mid-point of the road.

The 4.3in, 16:9 touchscreen can be a little reluctant to register finger presses, too, and we also couldn’t find a way to switch the onscreen keyboard from alphabetical to QWERTY. So if you’re more comfortable with the latter you will find yourself hunting around for the right letters. 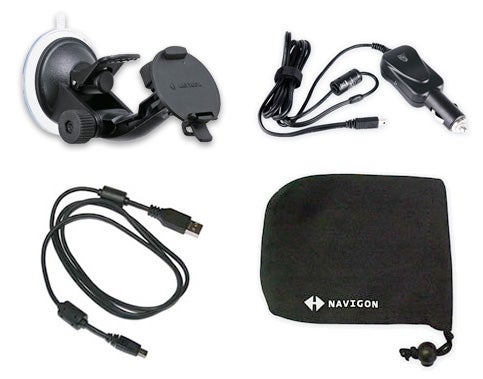 On the plus side, as you add letters, your choice is narrowed down to the characters which are still available from the possible address choices. It’s bit like predictive text on a mobile phone, except of course you can’t make up addresses. So only destinations which actually exist are included. This does speed entry, making up a little for the lack of QWERTY.

We also had some trouble hooking up the Navigon’s Bluetooth to a Motorola mobile phone. It took a number of attempts to pair them together, after which it proved quirky in operation. Although Bluetooth can be quite quirky in general, dialling numbers didn’t seem to work at all on the 7210. But we could pick up incoming calls and use it as a speakerphone kit.

Aside from searching for Points of Interest by name and navigating to them directly, the 7210 also provides quick access to nearby petrol stations, parking and food by default. But you can change each of these three slots to any of the 25 available POI categories. The quick access only works when you actually have a GPS signal, though, as otherwise the icons are greyed out and can’t be selected. 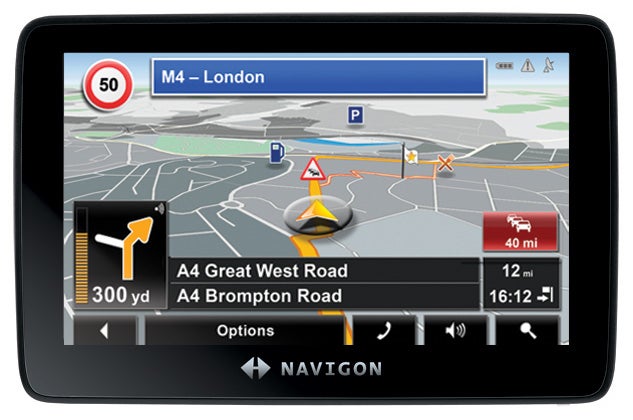 The 7210 incorporates a single USB socket which is used for charging, PC connection, and attaching the RDS-TMC aerial. We found the device could be powered by other mains adapters using a USB connection, such as a Motorola phone charger, which could come in handy. Unfortunately, one trend Navigon hasn’t yet followed is the integration of the car power connectivity with the screen mount, so you still need to plug this in separately before securing the 7210 on its cradle. But at least the cradle is relatively easy to use. The 7210 has a port for an external GPS aerial, as well, which not all sat-navs offer these days and will be useful if your windscreen degrades the signal too much.

The Navigon 7210 looks like a formidable sat-nav on paper. It certainly follows all the latest navigational feature trends. However, its interface lets it down, and there are precious few extra utilities. If you’re after a premium sat-nav with full European maps, TomTom’s GO 730 T (the 530 T but with full European maps) offers similar features for less, whilst Garmin’s nuvi 860 provides much better voice capabilities for around the same price.