I have to admit that I like Canon cameras. I have an EOS SLR, an APS IXUS and a PowerShot G1 that accompanied me throughout a world trip, taking 2,000 pictures along the way. However, I never seem to use film anymore, especially APS which costs so much to buy and develop, and my G1 is finally starting to show its age, both in resolution and physical size. I was therefore quite excited when Canon sent me the new Digital IXUS 500 to look at.

Although the IXUS range of cameras has always been achingly stylish, right from the very first APS model, this latest digital incarnation is quite simply stunning. In fact the Digital IXUS 500 makes my old APS IXUS look positively obese.

But the IXUS’ beauty is more than skin deep. Everything about this little camera just oozes quality. The metal body is reassuringly cool to the touch and the whole camera feels solid enough to withstand a fair amount of abuse. The control layout is well thought out and at the rear, the right hand side of the body where your thumb naturally falls is clear of controls, so there’s no chance of any inadvertent button pressing. That said, when you do need to activate any of the controls, everything is exactly where you want it to be.

Anyway, enough about the visual and tactile qualities for a while, let’s take a look at the specifications. Despite it’s diminutive size, the Digital IXUS 500 is equipped with a five megapixel CCD which can produce images at a resolution of 2,592 x 1,944. At this top resolution a picture taken with minimal compression will create a jpeg file of around 2MB. This means that you can fit around 15 top quality images on the supplied 32MB CompactFlash card. Unfortunately there’s no RAW or uncompressed TIFF option, but with a tiny camera like this, it’s unlikely to be an issue for the target buyer. You get a 3x optical zoom lens that’s equivalent to 36-108mm in 35mm language. There’s also a 4.1x digital zoom, but I’d never recommend using such a feature; you’re better off cropping and zooming in Photoshop later.

The Digital IXUS 500 is definitely more than just a point and click device. If that’s all you want from your camera, just leave it set to the auto mode and let the IXUS do everything for you. If you want to be a bit more adventurous, you’ll probably be surprised at how much control you can have over your images.

By default the camera will choose the shutter speed for you, and if it determines that there isn’t enough light it will activate the built-in flash. However, there is also a long shutter mode. If you activate the long shutter mode, you can set the shutter speed to anything from one second to 15 seconds. Obviously you’ll have to rest the camera on something if you’re going to use a long shutter, but the fact that you can keep the shutter open for 15 seconds on a camera this small is pretty impressive. If you’re using a long exposure, even the act of pressing the shutter button can be enough to jog the camera and ruin the image. To avoid this, I always use the self timer when I’m taking a long exposure shot. It can however be annoying to wait 10 seconds before the shutter is activated when using a self timer function. Canon is obviously aware of this fact and the Digital IXUS 500 allows you to set the self timer to either 10 seconds or two seconds – very considerate indeed.

The manual control doesn’t just stretch to shutter speed though, you can also set exposure compensation between -2 and +2 in 1/3 stops. There is a histogram function to help you get the exposure compensation spot-on. However this feature isn’t live and the histogram data is only displayed when you’re viewing images you’ve already taken. That said, it does give you the chance to view your image straight after taking it, and see if your exposure settings were correct.

You also get a plethora of white balance pre-sets for use in various lighting conditions, in case the auto white balance setting can’t quite work things out right. If none of the pre-sets seems to work, you can manually set the white balance using a piece of white paper or cloth as the point of reference. The ISO speed can also be adjusted between 50 and 400. If you want to shoot without a flash in low light, the faster ISO settings are useful, although you will introduce more CCD noise in the process. However, I tended to keep the camera set to ISO 50 for best quality, although it does mean that you have to take precautions to avoid camera shake when shooting without a flash.

On the top of the camera body you’ll find the power button and the shutter release button that’s circled by the zoom control. Both the shutter release and zoom control fall under your index finger perfectly. A press of the power button has the camera ready to shoot in around a second, making it seem like an eternity every time I switch on my old Canon G1.

On the back of the body you’ll find the rest of the controls. Just behind the shutter release is a small sliding switch that flips the IXUS 500 between record and viewing modes. Talking of viewing, the 1.5in LCD colour display is excellent. The image is bright and well resolved, while the refresh, even when moving the camera around quickly in record mode, is stunning. Framing your shots with the LCD screen is a breeze and the auto focus will indicate exactly what part of the frame is the focal point. Anyone who’s used a Canon camera before will know that pressing the shutter halfway down will initiate the auto focus. If you keep the button half pressed and then move the camera, you have the option of spot focusing on an area that isn’t at the centre of the frame.

Below the LCD screen are four buttons, set, menu, disp and func. The set button is for confirming selections within the menus. The menu button, unsurprisingly, takes you into the configuration menus for the camera. The disp button will toggle the LCD screen on and off, in case you want to use the optical viewfinder and conserve battery life. The func button gives you access to all of the photo controls such as white balance adjustment, exposure compensation, shutter speed etc.

Next to the screen are four more buttons arranged in compass configuration. These buttons are used to navigate through the various menus, but they also have direct functions of their own. The top button sets the light metering, while the right button selects the flash mode. The left button toggles between macro and infinity modes, while the bottom button selects either continuous shooting or the self timer. The final button at the back is for the Direct Print function which allows you to print directly from the camera to a similarly equipped Canon printer.

On the left side of the casing there’s a rubber bung hiding the USB port and an AV output. Finally at on the base of the camera you’ll find a standard tripod screw mount.

Besides fully auto and manual modes, you also get a panoramic mode, that allows you to stitch lots of images together in order to make a massive panoramic shot. Finally you can also shoot movies with sound. Shooting at 640 x 480 you’ll get 15 frames per second, while dropping down to 320 x 160 gives you the full 30fps.

Even the battery charger is well considered. Instead of just having a power supply that plugs into the camera to charge the battery, the battery is inserted into the charger and charged outside of the camera itself. This means that you can have two batteries and still use the camera while one is charging.

So, there’s not much left to talk about other than the quality of the images. Even the most feature rich and stylish camera can be rendered useless if the images it takes are poor. Thankfully, the Digital IXUS 500 produced superb images under almost any condition. Taking quick snaps in auto mode produces surprisingly good results, showing that Canon has spent a lot of time and effort getting the automatic settings right. But if you want to spend some time and explore the manual mode you can produce some truly great pictures.

The colour reproduction on the images is extremely accurate, while the detail resolution is also top notch for a pocket size camera. There’s a reassuring lack of CCD noise in the images, which is of course helped by the ISO 50 setting that most other digital cameras don’t have. There will be some purists out there who will be put off by the lack of an uncompressed TIFF or RAW mode, but as already mentioned, I don’t think that’s the market Canon is going for with such a small and stylish piece of kit.

It’s not often that I search this hard for something negative to say about a product, and it’s not from lack of testing. The Digital IXUS 500 accompanied me to CeBIT where it performed flawlessly, and I’ve pretty much carried it everywhere with me since Canon sent it over.

Obviously with a product this small and stylish, you expect the price to be correspondingly high and scary, but amazingly that’s not the case. With a street price of just over £300, this camera is an absolute bargain.

Canon started the trend for pocket size, designer cameras with the original APS IXUS and every other manufacturer has jumped on the bandwagon. There is now no shortage of tiny, beautifully constructed cameras on the market, but the Digital IXUS 500 shows that Canon still has the edge.

With the Digital IXUS 500 Canon has shown that it’s not sitting back on its laurels and is still driving the IXUS brand forward. Not only is it one of the most beautifully designed cameras I’ve ever used, but its feature set is stunning considering its size, and the price is just unbelievable. If you’re looking for a pocket size digital camera, this is the one to go for. In fact, I think I’m going to buy one myself. 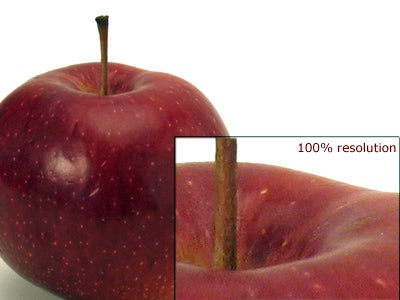 Close up: This shot is well exposed, has no obvious underlying colour cast, and matches the original subject closely. Edges are pretty sharp and noise is minimal. Shot at ISO 50. 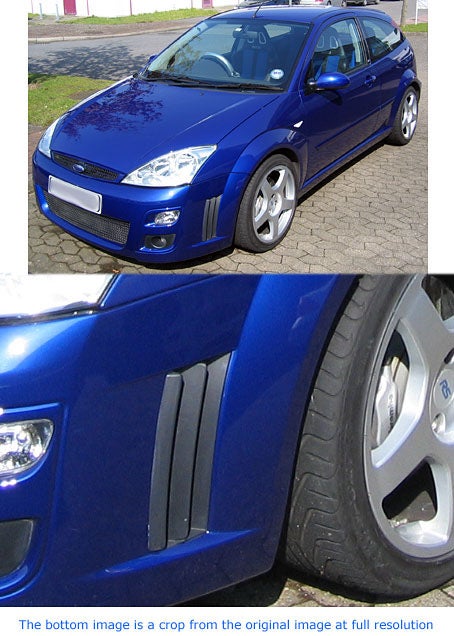 The colour reproduction on the images is extremely accurate and definition is good. Shot using the full auto mode. 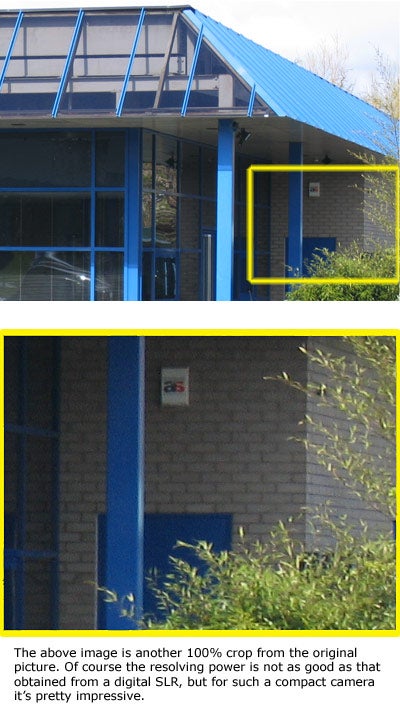