MS Dhoni has performed well not only in the blue jersey but in the yellow jersey as well. He has been associated with the IPL team Chennai Super Kings (CSK) since the inception of the tournament in 2008 and is the second most successful IPL skipper as CSK has won the IPL title three times under his leadership. CSK fans usually refer to MS Dhoni as Thala which means leader or head in the Tamil language.

We have seen fans of Dhoni doing various things for paying tribute to their favourite cricketer but one fan has broken all the limits as he managed to bring Mahi and Thala together on the cricket field and that too as batsmen. Just imagine MS Dhoni batting from both ends, no team can even dream to defeat that team which has both Mahi and Thala batting for them. However, there was a section of online users who got fumed after seeing the logo of Royal Challengers Bangalore (RCB) in the GIF and wanted to get it removed. 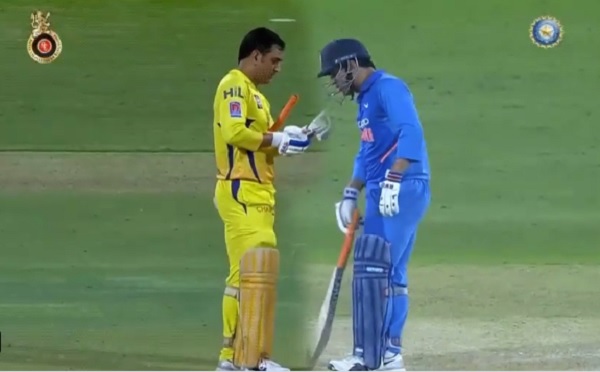 Here is the edited GIF that is making fans go crazy:

Dhoni fans started expressing their love as they found it one of the greatest GIF edits ever. Here are some of the selected reactions:

One of the greatest edited gifs ever made. 🔥🔥🔥

The best edit till date 😍🙌

I can’t stop watching it

this is the goatest edit i have ever seen of Dhoni..

This is actually our Emotion 🥺❤️

This is Masterpiece. Thank You. Be proud.

Deserves a reply from @msdhoni

What do you think about this edited GIF? Share your views with us.